The overfilled letterbox of the overwhelmed donor 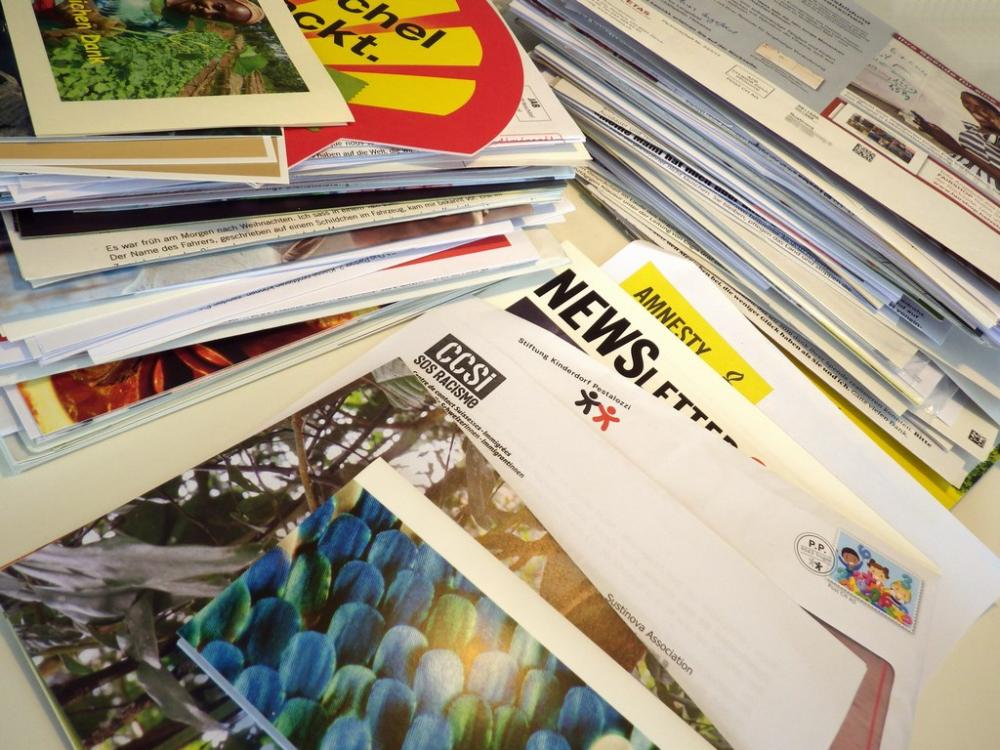 (Photo above: the collection of mail received by Sustinova during 2016, after we started routing donations as part of our Sustinova Connect pilot project. We left the presents and trinkets out of the photo)

In December 2014 we started Sustinova Connect, a pilot project, together with some private donors who donate regularly to multiple organisations and in meaningful amounts. Our primary goal was to assist with specific issues they faced when donating to NGOs, particularly in the bureaucratic part and in managing the relationship. Starting with the donor's needs, we engaged with the recipient NGOs to collect data and to test solutions that address these needs and increase transparency in the donor-NGO relationship. As part of this pilot project, Sustinova conducted two funding rounds, one in 2015 and another in 2016, with another one coming in 2017. In each round, funds were directed via Sustinova to 40 Swiss-based organisations. The rationale, approach and results are presented here.

In this post, we want to present the perspective of one of these donors. For this person, managing the avalanche of contacts by NGOs has become a source of annoyance. The regular stream of unsolicited letters with donation requests and trinkets - familiar to many households - and the invitations aiming to deepen the relationship, erode the motivation for giving. They also raise questions and concerns:

A common aspect of the current approaches is that the (potential) donors are left in a reactive position, lacking proper options to adjust the communication flow. From our discussions, we see that this actually encourages them to avoid engaging or to stop giving, in order to avoid these issues. For us, this leads to another question: is there a way to empower the (potential) donors and how can the NGOs be part of the solution?

We will be expanding on this topic in the coming months, discussing directly with different parties and online through our website. We hope that the testimony below can be an element in this discussion.

The overfilled letterbox of the overwhelmed donor

"There are many non-profit organisations that work to improve the world for those with a disadvantage and to keep it in a better shape for future generations. These organisations bring a lot of experience and knowledge and have goals that I find worth supporting. As such, and because I have the financial possibilities to do so, I gladly support their work by donating to them. If I was not convinced by their work, I would not donate since I do not donate to appease my conscience. Rather, I try to live in a way that I consider to bring the least harm to the environment and to those in socially weaker conditions.  Also, I am convinced that a society can only develop itself further when a certain measure of social justice and security exists and when it is surrounded by an intact environment.

When I support an organisation, I expect that it uses the money for the goals they announce and not that it tries to please me with small presents. It frequently amazes how many resources – and, likely, also donor’s money – are invested in the many original presents gifted to the donors. It goes from Band-Aids, postcards, calendars, candles, towels and cloths to magnifying glasses and even sand paper! If I decided to keep all these presents, I could certainly fill a few boxes by now. For someone who lives in Switzerland like I do, and already has more than enough of everything, this brings a sense of weariness over time.  And, like much of the advertisement mail, these token gifts end up in the trash or paper for recycling every now and then.

Another problem I have with this is that my mailing address is clearly being given around to fundraisers. Otherwise, how do I end up with begging letters from organisations which I had never heard of before? These begging letters multiply themselves in an amazing way, and often one receives a present even before having made a donation! As if I would find the organisation good simply because they sent me a greetings card or an original trinket. There are days in which I receive 5 such letters; particularly before Christmas, when the mailbox fills up with these. Even as a dedicated donor, it is a challenge to have enough time available for this. Maybe I could spend more time reading these requests and doing research about these organisations. But then I would have less time to work and, therefore, less money to donate. What to do? Donate no more and hope that they give up, sometime? Contact each organisation to tell them that I do not want a thank you letter and a present and a new request for donations every two weeks (I’ve tried it but did no good)? If there’s anything I want to receive in the mail, then it is simply one letter per year, with a confirmation of the donations made and the form for a new donation. Even though this could, in theory, also be done electronically… Everything else, such as reports and newsletters, are already available in paper-less format in this digital era of ours.

If I want to keep on donating, without being over-flooded with letters and trinkets, I have currently no option other than to do so anonymously. But how will I then receive the confirmation of the donations, which I want in any case? Most likely, I could do it over an organisation that processes my donations and then gives me one document for all the donations made. And if more donors did this, it could also be a cost reduction for the supported organisations: the donations would come together, and the printing and postage expenses could be reduced. This would make much sense, from my perspective as a donor. Otherwise, there is a risk that my appetite for donating is completely suffocated by an overfilled mailbox.

Fundraising in a nutshell

A few remarks for donors

Why is fundraising needed?

Given their business model, most NGOs need to resort to fundraising to finance their projects and the organisation itself.

Institutional funding, from public authorities or foundations, is the predominant source of funds for many NGOs in Switzerland, particularly the bigger ones. Such funding is usually restricted to specific programmes or projects (with a predefined overhead margin) and excludes running costs and investments in professionalization, equipment or growth. Complementary actions, such as pilot projects, external assessments or certifications are also usually excluded. This means that such costs, which are normal in any proper organisation structure, have to be covered through other means. Failing that, they are often scaled down or avoided.

As such, NGOs will normally try to increase and diversify their base of donors to diminish risk and dependency. To achieve a predictable, regular income stream they try to acquire supporters committed on a longer-term basis through single large donations (a legacy, for example) or recurrent smaller ones.

How is it done?

The normal fundraising procedure starts with trying to establish a contact and a connection to potential donors. This contact might be more indiscriminate, like a mass mailing campaign or a street stand, or more targeted to certain people or groups, by attending an event or through a facilitator.

Fundraisers and professional NGOS usually segment the donors in categories according to source (e.g., individual vs institutional), potential amounts involved (from 10CHF a year to several thousands) and expected continuity of engagement. Bigger, more mature organisations tend to have a greater segmentation of donors types, with separate processes to handle them. The general fundraising and communications strategies, targeting actions and follow-up efforts are also adjusted in accordance.

Donors like the one in this post would be classified as “High” or “Major” by many NGOs, since each individual donation tends to range between 250 and 1'000CHF. Based on this amount alone, which triggers the expectation for bigger donations, such a donor tends to be more actively courted.

Usually, any identified donor will receive a thank you letter, a receipt for the taxes and – using the opportunity – the next donation request form. A few more letters will likely follow during the year, asking for donations. Bigger donations will result in more: leaflets or newsletters, the yearly report, invitations for events, a small present, a phone call to personally thank the donor and try to know him/her better. Under a purely economic logic, the nice old lady that donates 10CHF will be given less attention than the one that has given 500CHF (or might do so). Still, any of these will likely receive at least one letter.

Who handles the process?

Almost any part of the fundraising work can be contracted from external service providers, and many NGOs do so. For this, there is a range of professionals and approaches for almost any purse (see Footnote). The reliance on external support is partly related to the size of the organisations:

Footnote: a short listing can be found, for example, in the website of the association of Swiss fundraisers

As part of the fundraising work, NGO employees or external collaborators - either paid or volunteering - collect and store data on donors. This carries legal obligations, of which NGOs are not always aware.

The data might come from public and private sources, either free or paid for. Asides from the information the NGO collects on its own donors, more can be acquired from free sources, such as the Federal register of Business Names (Zentraler Firmenindex des Bundes - ZEFIX), or bought from web portals, external fundraisers and direct marketing agencies. The latter ones sell names and contact details in bulk, eventually with additional details on location, socio-economic levels, etc.

Over time, these datasets accumulate a mix of information on institutional donors (such as grant-making foundations) and individuals. The information might include personal details and preferences of donors, donation history, etc., some of which can be seen as sensitive.

How this information is stored and shared depends strongly on the fundraising setup of an organisation:

There are nonetheless situations where some data has to be disclosed to external parties: for example, if the donation receipts are printed by an external service, the name, address and (normally) the donation amount of each donor have to be provided. In addition to the technical constraints imposed by software solutions, the organisation can also adopt certain formalities or procedures, such as having an internal policy or contractual clauses on data handling which collaborators and external parties are obliged to follow. This can increase awareness and the level of care by those involved. An applicable good practice is to ensure that the supplier signs a non-disclosure agreement and keeps the data only for the purpose and time needed to complete the task.

From Sustinova’s point of view, adopting such precautions and the mechanisms to enforce and verify them is highly recommended. Besides showing a proactive concern for its donors, it can help to reduce risk (reputational and otherwise). These aspects are important and likely to come under increased scrutiny, in line with broader societal trends.

As such, our team will be linking with the NGOs and other stakeholders, working with together to assess the current situation and disseminate good practices.